Actual Size by Steve Jenkins
Discusses and gives examples of the size and weight of various animals and parts of animals.

Big and Small, Room for All by Jo Ellen Bogart
This clever concept book explores the size of animate and inanimate objects and their place in the universe. She introduces children to the concept of "we" ― that humans are a big part of the world, but a small part of existence.

Big Bear, Little Chair by Lizi Boyd
In pictures and simple text the book presents unexpected opposites, like a big zebra sweeping with a little broom, or a big lion riding in a tiny wagon.

Big Bug by Henry Cole
Beginning with a bug, various objects are revealed as being big and small in comparison with other objects on a farm under the big, big sky. 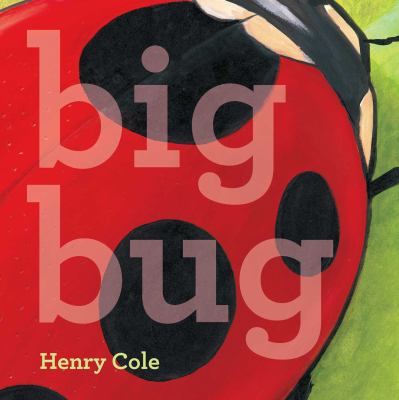 Big Bunny by Rowboat Watkins
A parent and child share the telling of a story about a giant bunny who eats carrots―and maybe trucks and bridges.

Dino Bites by Algy Craig Hall
A cumulative story finds a hungry dinosaur munching and crunching and searching for lunch until his appetite leads him to a buzzing noise, a hop and a wriggle before he encounters a big surprise.

A House for Birdie by Stuart J. Murphy
As Birdie and his friends try to locate a house that is just right for his size, readers learn about the concept of capacity.

How Big Were Dinosaurs by Lita Judge
Dinosaurs and modern life collide in a very young picture book that clearly illustrates how big dinosaurs really were.

How Long is a Whale? by Alison Limentani
Have you ever wondered how long a blue whale is? How about a dolphin or a sea lion? Find out in this fascinating book of facts, numbers and wildlife.

I Am Just Right by David McPhail
A boy who is too big for his crib, his tricycle and being picked up by his grandfather is just the right size for his bed, bicycle and Grandpa's hugs.

I’m the Biggest Thing in the Ocean by Kevin Sherry
A giant squid brags about being bigger than everything else in the ocean―almost.

I’m Not Little! by Alison Inches
Little Shaggy, a fuzzy little monster, is tired of everyone calling him little until his mother brings his new baby sister home and Little Shaggy suddenly misses being the youngest.

A Pig is Big by Douglas Florian
Rhyming text explains that cows are bigger than pigs, cars are bigger still and the universe is the biggest of all.

Poor Little Guy by Elanna Allen
An octopus gets a big surprise when he chooses to pick on a tiny fish in the ocean.

You Are (Not) Small by Anna Kang
Two fuzzy creatures can't agree on who is small and who is big, until a couple of surprise guests show up, settling it once and for all!

You Must be This Tall by Steven Weinberg
The story of two snake friends, Frank and Harold, who do everything together and want to ride the Rattler Roller Coaster. But one of them is not tall enough.