One of the five early literacy skills is vocabulary — knowing the names of things. If you read picture books to children, you will expose them to words they would not hear in daily conversations with adults.

Out of This World: Books 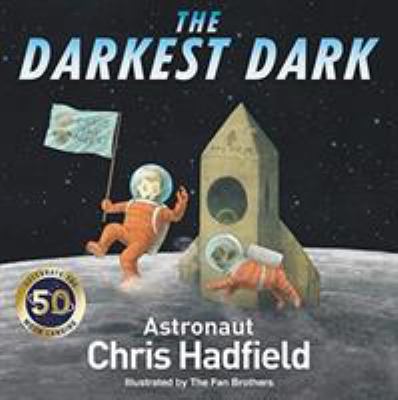 Going Around the Sun: Some Planetary Fun by Marianne Berkes
Our Earth is part of a fascinating planetary family: eight planets and an odd bunch of other solar system bodies that spin, roll, tilt, blow and whirl around the Sun. Here, to the tune of 'Over in the Meadow,' young ones can get a glimpse of our remarkable neighborhood.

Hedgie Blasts Off by Jan Brett
When the spectacular, sparkling explosions at a popular tourist sight slow down, Hedgie the Hedgehog is the only one capable of flying to tiny planet Mikkop to see what is wrong.

A Kite for Moon by Jane Yolen
A young boy, seeing that Moon is lonely, sends up a kite to cheer her then, after growing up and learning many things, he becomes the first human to visit her. Dedicated to Neil Armstrong and written in recognition of the fiftieth anniversary of the first U.S. Moon Landing.

Life on Mars by Jon Agee
A young astronaut is trying to find life on Mars, but he's made a very big oversight.

Man on the Moon: A Day in the Life of Bob by Simon Bartram
Presents a typical day in the life of Bob, the man on the Moon, who rockets to work each morning, cleans up after the astronauts, and performs other duties before returning home for a bath and bed.

The Moon’s First Friends: One Giant Leap for Friendship by Susanna Leonard Hill
High up in the sky, the Moon has spent her whole life watching the happenings of Earth below, from dinosaurs roaming to planes taking flight, hoping for a visitor, until one day in 1969 when a spaceship soars from Earth. Includes Earth timeline and a history of space exploration.

Moon: A Peek-Through Picture Book by Britta Teckentrup
Die-cut pages show the phases of the Moon as it shines on animals all over the world, from sea turtles laying eggs on the beach to frogs in the jungle and mice in the fields.

Music for Mister Moon by Philip Christian Stead
After shy cello player Harriet Henry accidentally knocks the Moon out of the sky, the Moon becomes her friend, and Harriet gains the courage to share her music.

Penguinaut! by Marcie Colleen
Orville is a little penguin who lives in a zoo and dreams of big adventures, like going to the Moon; the other animals are skeptical, but Orville is determined, so he builds a spaceship and sets out all by himself—and discovers that real adventures are best when they are shared with friends.

Peppa in Space by Reika Chan
Peppa Pig goes to a museum with her family where she takes a pretend trip to outer space and the Moon.

Zoo Zoom! by Candace Ryan
The animals at the zoo have a great idea—to take a rocket into outer space! But this flight of fancy goes awry when the hippo falls asleep on the job.

Some non-fiction books may not be developmentally appropriate for every preschooler. You know your children—if any of the text is beyond where you think they are, you can still use the book by discussing the pictures and illustrations.

I Want to be an Astronaut by Byron Barton
A young child thinks about what it would be like to be an astronaut and go out on a mission into space.

Little Kids First Big Book of Space by Catherine D. Hughes
Introduces basic concepts about outer space, from the Sun and the Moon to the planets and space exploration. 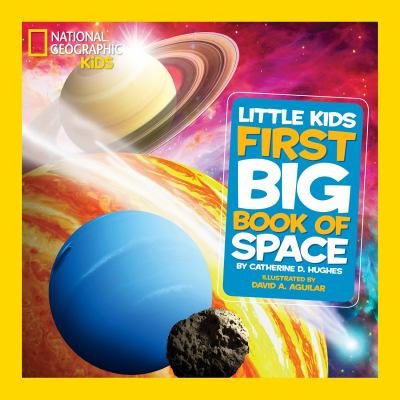 Me and My Place in Space by Joan Sweeney
An out-of-this world introduction to the universe for children. With Earth as a starting point, a young astronaut leads readers on a tour past each planet and on to the stars, answering simple questions about our solar system.

Our Stars by Anne Rockwell
Every night many twinkling stars appear in the wide sky. From the Earth below, we can see the glowing Moon, and sometimes even a bright meteor shooting through space.

The Planets by Gail Gibbons
From the burning surface of Venus to the freezing darkness of Neptune, Gail Gibbons takes children on a tour of our planetary neighbors—which are very different from each other in size, shape, orbit and even weather.

Out of This World: Songs and Rhymes

Four little stars,
Winking at me.
One shot off,
Then there were three!

Three little stars,
With nothing to do.
One shot off,
Then there were two!

Two little stars,
Afraid of the sun.
One shot off,
Then there was one!

One little star,
Alone is no fun.
It shot off,
Then there was none!

I’m a little astronaut,
Flying to the Moon.
My rocket is ready,
We blast off soon.


Put on your helmet, (pretend to put on helmets)
Strap yourself in tight. (buckle your safety belt)
Check your controls and instruments, (pretend to move knobs)
Get ready for the flight. (pretend to turn on switches)

Jump in the Rocket

Jump in the rocket.
We blast off soon.
We’re taking a trip,
Up to the Moon.

Tuning Up for Outer Space
(Tune: "The Farmer in the Dell")

Continue with other verses:

We’re Flying to the Moon
(Tune: “The Farmer in The Dell”)

Did you feel the blast?
We’re climbing up so fast.
Hang on tight, what a sight!
We’re flying to the Moon.

We’re soaring through the air.
I think we’re almost there.
Retro rockets going off!
We’ve landed on the Moon!

We climb down the stairs,
With our tanks of air.
We plant a flag, then grab some rocks,
And take them back to Earth.

We’re flying oh so fast.
Then we’re home at last.
What a flight, what a sight.
Flying to the Moon!

Out of This World: Websites