Picture Books About Fears and Worry 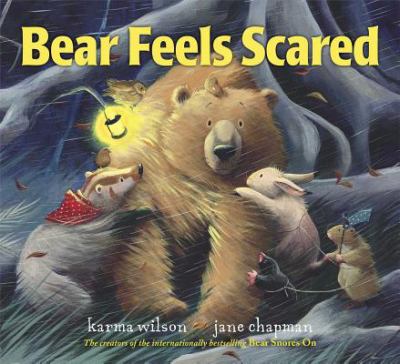 The Doghouse by Jan Thomas
Cow, Pig, Duck and Mouse are afraid to retrieve their ball when it goes into the dog's house, but when they do go in, they are pleasantly surprised.

Emily Grace and the What-Ifs: A Story for Children About Nighttime Fears by Lisa Gehring
Emily Grace runs into her room for bedtime, quickly drawing up her covers out of fear, soon wondering What if a big rhinoceros ... or What if I wake up tomorrow a princess ... or What if my eyebrows fall off ... In the end, Emily decides to try falling asleep.

I Am (Not) Scared by Anna Kang
Two fuzzy creatures go to an amusement park and discover that being frightened may not be as scary as one thinks.

Me and My Fear by Francesca Sanna
When a young girl moves to a new country and starts at a new school, her fear tells her to be alone and afraid. She worries that she won’t make any friends if she can’t understand anyone. Surely no one else feels the same way.

Off and Away by Cale Atkinson
Jo fears what lives in the ocean but when her father is too ill to deliver messages in bottles, she courageously takes on the job, making new friends along the way.

The Rabbit and The Shadow by Melanie Rutten
Three strangers meet in the forest and decide to hike to the top of a volcano together. Along the way, they help each other confront their fears and insecurities.

Snip! Snap! What’s That? by Mara Bergman
Three siblings are frightened by the wide mouth, long teeth and strong jaws of the alligator that has crept up the stairs—until they decide they have had enough.

There are No Bears in This Bakery by Julia Sarcone-Roach
When Muffin, a cat, hears a suspicious noise at the Little Bear Bakery, his investigation reveals a hungry bear cub.

This Book is Spineless: (Yes, Yes, I Am) by Lindsay Leslie
A wary and unadventurous book uses its different parts, such as the jacket, gutters and endpapers, to get a sense of what kind of story might be on its pages. By navigating the book's contents together, the reader and the book become friends and the book becomes braver.

This is the Chick by Wendy Hartmann
A tiny chick's peep sets off a chain reaction that sends the other jungle animals running in fear until the wise old owl calms everyone again.

Tickle Monster by Edouard Manceau
At bedtime, a brave child makes a monster disappear by tickling its various parts, such as its teeth so it cannot bite, and the parts transform into new objects that create a non-threatening scene.

The Visitor by Antje Damm
Elise is scared of everything - spiders, people, even trees. So she never goes out, night or day. One day a strange thing flies in through the window and lands at her feet. And then there comes a knock at her door. Elise has a visitor.

Zee is Not Scared by Michel Gay
When Zee the zebra's parents will not let him watch a scary movie, he decides to be a ghost himself.