The 12 Dancing Princesses by Rachel Isadora
A retelling, set in Africa, of the story of twelve princesses who dance secretly all night long and how their secret is eventually discovered.

Mirror, Mirror: A Book of Reversible Verse by Marilyn Singer
A collection of short poems which, when reversed, provide new perspectives on the fairy tale characters they feature.

The Paper Bag Princess by Robert MunschWhen a fierce dragon destroys her castle and clothes, and carries off the prince she was going to marry, a brave and resourceful princess cleverly outwits the dragon. 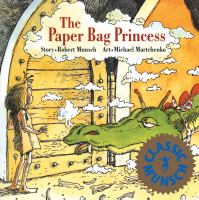 The Prince Won't Go to Bed by LeAnn Dodds
When the young prince refuses to go to bed, assorted members of the royal household offer their ideas on exactly what he needs, but it is his sister, Princess Kate, who learns the truth.

Princess, Princess by Penny Dale
A young princess and her friends sleep under the spell of a fairy she forgot to invite to her birthday party, until someone comes along to awaken them.

Take Care, Good Knight by Shelley Moore Thomas
The three little dragons have agreed to take care of the old wizard's cats whie he is away, but their inability to read his instructions causes problems, until their friend, the Good Knight, saves the day.

The Very Smart Pea and the Princess to Be by Mini Grey
The pea gives its own version of what happened in the fairy tale, ""The Princess and the Pea,"" from the time of its birth in the Palace Garden until it helps arrange a royal marriage.

The Worst Princess by Anna Kemp
Lonely Princess Sue longs to leave her castle tower, but when her prince finally rescues her, she realizes she is destined for a less traditional partner.

Falling for Rapunzel by Leah Wilcox
To rescue Rapunzel from her tower, a prince yells for her to throw down her hair; but being too far away to hear clearly, she tosses out various items from her room, including her maid.

Lovabye Dragon by Barbara Joose
A little princess wants a dragon for a friend, and vice versa, and finally they meet. Super sweet, and the inclusion of the dragon made it more palatable for those who aren’t nuts about princesses.

Over at the Castle by Boni Ashburn
Knights, castle and dragon rhyming counting to 10 book, can be sung to “Over in the Meadow”.

Waking Beauty by Leah Wilcox
Prince Charming tries all sorts of silly ways to wake Sleeping Beauty before he learns how he is really supposed to wake her up.

When a Dragon Moves In by Jodi Moor
A young boy builds a sand castle on the beach and a dragon moves in. The boy and the dragon spend the day at the shore flying a kite, braving the waves and defying bullies.