123 Versus ABC by Mike Boldt
Numbers think they're the stars of this book, but Letters disagree.

7 Ate 9: The Untold Story by Tara Lazar
When 7 is accused of eating 9, worried 6 hires a detective to investigate. 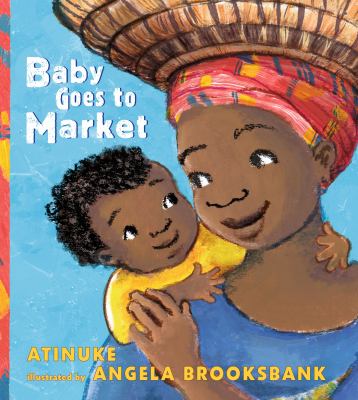 Baby Goes to Market by Atinuke
Join Baby and his doting mama at a bustling southwest Nigerian marketplace for a bright, bouncy read-aloud offering a gentle introduction to numbers.

Counting Crocodiles by Judy Sierra
In this rhymed retelling of a traditional Asian tale, a clever monkey uses her ability to count to outwit the hungry crocodiles that stand between her and a banana tree on another island across the sea.

Dotty’s First Book by Becky Baur
Illustrations introduce very young children to colors, numbers, shapes, opposites and first words. Each spread introduces a key concept either via a single scene or a number of small artworks - all with first word labels.

Edible Numbers by Jennifer Bass
A colorful and delicious counting book featuring an array of familiar and unfamiliar fruits and vegetables.

Goodnight, Numbers by Danica McKellar
Illustrations and simple text help the reader understand the numbers one to ten and recognize them as they appear all around us, especially at bedtime.

Hamsters Holding Hands by Kass Reich
A fun counting board book with loveable hamsters that lead young children from numbers one through ten.

Max’s Math by Kate Banks
Max and his brothers drive to Shapeville and Count Town searching for problems, and are able to use their skills in arithmetic and sleuthing to help get things ready for a rocket launch.

One Odd Day by Doris Fisher
A humorous, rhythmic, read-aloud story about a boy who awakens to find that everything around him is odd. He has three sleeves on his shirt, and his dog has five legs. Things are no better at school either.

Papa Seahorse’s Search by Anita Bijsterbosch
Daddy Sea horse has lost one of his baby seahorses. He looks behind the coral, inside the shell and under the rocks, but he just finds lots of other animals.

Sam Sorts: (One Hundred Favorite Things) by Marthe Jocelyn
While cleaning his room Sam organizes one hundred things in a series of different categories.

Stack the Cats by Susie Ghahremani
Cats of all shapes and sizes scamper, yawn and stretch across the pages of this playful counting book. And every now and then, some of them pile into the purrfect cat stack.