Dude! by Aaron Reynolds
A platypus and a beaver are friends. They want to go surfing but, dude, there's this shark who's in the ocean, too. But don't worry. This shark approaches and, dude! You'll never guess what happens.

Hum and Swish by Matt Myers
Jamie wants to quietly work on an art project near her friend, the sea, but people keep disturbing her by asking questions.

Mermaid Dreams by Kate Pugsley
Pearl loves the beach, but it would be more fun if she had a friend. Too shy to say hello, Pearl watches the kids play nearby, and slowly her eyes droop closed.... When Pearl awakens, she discovers that she is a mermaid! Making new friends may not be as hard as you think – if you have a good imagination.

The Not-So-Faraway Adventure by Andrew Larson
Theo's Poppa was an explorer. Theo wants to be an explorer, too. For now, it's Poppa's birthday, and Theo has planned a special trip to the beach with him to celebrate. Theo is so happy to have given Poppa just the right gift.

The Ocean Craft Book by Clare Beaton
Nature crafts and activities for little ones.

On Gull Beach by Jane Yolen
At the Cape Cod shoreline, gulls perform acrobatics in pursuit of a sea star. 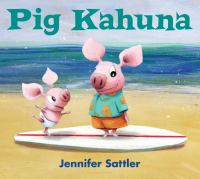 Pig Kahuna by Jennifer Sattler
Fergus is afraid to go in the water, but he and his baby brother Dink find a surfboard while collecting treasures along the seashore.

The Quiet Crocodile Goes to the Beach by Natacha Andriamirado
The quiet crocodile loves spending time on the beach and, with the help of his friends, he might get over his fear of the water.

Sea Glass Summer by Michelle Houts
A boy named Thomas finds pieces of sea glass on the beach and dreams of where they came from.

Sharks by Gail Gibbons
Describes different kinds of sharks and their physical characteristics. From huge whale sharks to tiny dwarf sharks, this book has everything you need to know about one of the most popular – and mysterious – sea creatures.

This Beach is Loud! by Samantha Cotterill
A sensitive boy gets overwhelmed by all the sights, sounds and sensations at the beach, but his dad has a trick to help his son face these unexpected obstacles.