A Cooked-Up Fairy Tale by Penny Parker Klostermann
A hapless young chef, hoping to impress workers at Fairy-Tale Headquarters, cooks some story ingredients he has found, and gives a new twist to familiar tales.

The Elves and the Shoemaker by Paul Galdone
When the poor shoemaker and his wife discover the two naked little elves who have helped them become successful, they sew fine outfits for them.

Goldilocks and Just One Bear by Leigh Hodgkinson
Little Bear, all grown up, finds himself lost in a noisy, busy city where he happens to bump into someone with golden hair who remembers exactly how he likes his porridge.

Grandma and the Great Gourd: A Bengali Folk Tale by Chitra Banerjee Divakaruni
On her way to visit her daughter on the other side of the jungle, Grandma encounters a hungry fox, bear and tiger, and although she convinces them to wait for her return trip, she still must find a way to outwit them all.

Hank and Gertie: A Pioneer Hansel and Gretel Story by Eric A. Kimmel
In this version of the classic tale, two children wander from the wagon train taking them west and find a log cabin made of candy, inhabited by a witch.

Hansel and Gretel by Bethan Woollvin
In a fairy tale twist, Hansel and Gretel ransack Willow the good witch's gingerbread cottage and play havoc with her spells, driving the poor witch to her wit's end.

Jack and the Beanstalk: A Folk Tale Classic by Paul Galdone
Jack climbs the great beanstalk that grows from the bean he bought and confronts a giant at the top.

The Little Red Hen by Paul Galdone
The little red hen finds none of her lazy friends willing to help her plant, harvest or grind wheat into flour, but all are eager to eat the cake she makes from it.

Little Red Riding Hood by Bernette G. Ford
Retells the story of a little girl who meets a wicked wolf in the forest on her way to visit her grandmother.

Little Red’s Riding ‘Hood by Peter Stein
In this version of the classic Little Red Riding Hood tale, Little Red, a brave moped scooter, sets out to bring spare parts to Granny Putt Putt, but ends up having to rescue her from Tank, the biggest, loudest and meanest machine in the neighborhood. 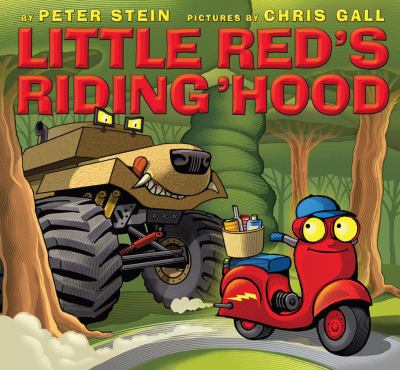 Little Roja Riding Hood by Susan Middleton Elya
A rhyming twist on the classic fairy tale in which a little girl saves her grandmother from a wolf. Includes glossary of Spanish words.

Previously by Allan Ahlberg
The adventures of various nursery rhyme and fairy tale characters are retold in backward sequence with each tale interrelated to the other. Includes Goldilocks, Jack and the Beanstalk, Jack and Jill, the Frog Prince, Cinderella and the Gingerbread Man.

So Say the Little Monkeys by Nancy Van Laan
A rhyming retelling of an Indian folktale from Brazil about tiny, playful monkeys and why they have no place to call home.

The Three Billy Goats Gruff by Jerry Pinkey
Three billy goats must outwit the big, ugly troll that lives under the bridge they have to cross on their way up the mountain.

The Three Pigs by David Weisner
The three pigs escape the wolf by going into another world where they meet the cat and the fiddle, the cow that jumped over the moon and a dragon.

The Twelve Dancing Princess by Rachel Isadora
A retelling, set in Africa, of the story of twelve princesses who dance secretly all night long and how their secret is eventually discovered.

Wait! No Paint! by Bruce Whatley
The three little pigs are in their usual trouble with the big bad wolf, until a mysterious Voice gets involved and mixes things up.

Waynetta and the Cornstalk: A Texas Fairy Tale by Helen Ketteman
A retelling of "Jack and the Beanstalk" which features a Texas cowgirl, a magic cornstalk and a giant cowboy in the clouds.