The Day I Lost My Superpowers by Michael Escoffier
When a young superhero in training gets hurt, she discovers that mothers have superpowers too.

Eliot Jones, Midnight Superhero by Anne Cottringer
By day, Eliot quietly reads his books, feeds his goldfish and watches Mr. Smith wash his car. But grown-ups don't know that when the clock strikes midnight, Eliot is a superhero on his most important mission ever.

Even Superheroes Have Bad Days by Shelly Becker
A group of superheroes are having a bad day and learn to cope with their emotions. 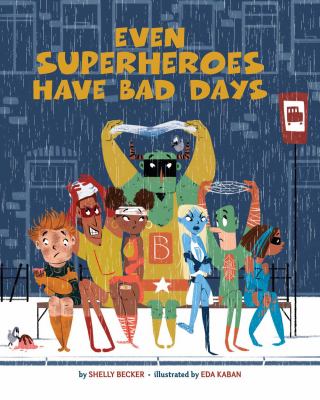 Good Morning, Superman by Michael Dahl
Follow along as a young boy gets ready for a superhero day.

He Saves the Day by Marsha Hayles
In a plane or race car, on the high seas, in a jungle or before a castle, a brave and daring champion saves the day, but sometimes he needs help.

Jinx and The Doom Fight Crime! by Lisa Mantchev
Instead of fighting each other, Jinx and her little brother The Doom spend their days fighting crime, protecting the planet, defending the innocent and taking lunch breaks.

Max and the Superheroes by Rocio Bonilla
Max is crazy about superheroes, like all his friends, but the one he loves most is Megapower—especially when she turns into his Mommy and gives him a goodnight kiss.

Mighty Truck by Chris Barton
When a muddy truck reluctantly gets a truck wash, he transforms into a superhero.

My Dad, My Hero by Ethan Long
A child describes his dad, who may not have superpowers, but is still wonderful.

Silly Goose’s Big Story by Keiko Kasza
Silly Goose tells wonderful stories that lead to great adventures, but soon after his friends complain that he always gets to play the hero, Silly Goose learns that his friends can be truly heroic.

Super Guinea Pig to the Rescue by Udo Weigelt
A guinea pig gets upset when his fellow pets make fun of his favorite television superhero, and so he makes a costume and pretends to be Super Guinea Pig himself.

Super Jumbo by Fred Koehler
Little Jumbo works tirelessly to be a superhero in his neighborhood, although not everyone appreciates his crime fighting techniques.

Teddy’s Favorite Toy by Christian Trimmer
A mom goes to great lengths to rescue her son's favorite doll in this delightful tribute to treasured toys—and mothers.