Bear Can’t Sleep by Karma Wilson
It's time for Bear to hibernate but he can't sleep, so his friends all band together to help. 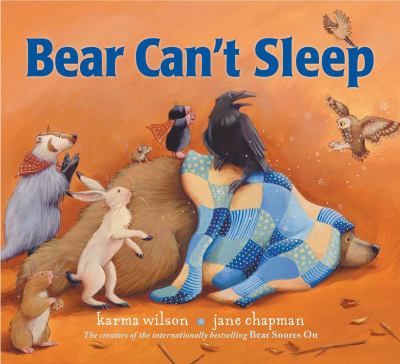 The Big Red Barn by Margaret Wise Brown
Follow the animals' day on the farm as the make their noises, play in the grass and return to the big red barn to fall sound asleep.

The Bunnies are Not in Their Beds by Marisabina Russo
Some young rabbits would rather play than sleep, much to their parents' chagrin.

Good Night Like This by Mary Murphy
In rhyming text, baby animals and their parents wish each other good night.

Good Night, World by Nicola Edwards
Rhyming text and appealing illustrations highlight children from various places around the world engaging in many of the same activities as they get ready for bed.

Goodnight, Anne by Kallie George
It's time for Anne to go to bed, but not before saying goodnight to everyone and everything she loves.

Goodnight, Little Monster by Helen Ketteman
Rhyming text describes a mother guiding her young monster through bedtime preparations, such as howling at the moon, snacking on worm juice and beetle bread and choosing a bedtime story.

Sleep, My Bunny by Rosemary Wells
A little bunny goes through his bedtime routine tidying up, taking a bath and reading a story.

The Squeaky Door by Margaret Read MacDonald
When Little Boy is frightened by a squeaky bedroom door, his grandmother brings in various animals to help him feel secure enough to sleep.

Sweet Dreamers by Isabelle Simler
Several different animals settle in for the night, each with their own unique way of sleeping.