100 First Things that Go by Dawn Sirett
Little ones learn first words and build vocabulary with this things that go book that's filled with cars, trucks, planes, boats, tractors and diggers. Favorite vehicles are clearly labelled on every page, with exciting photos combined and fun illustrations. 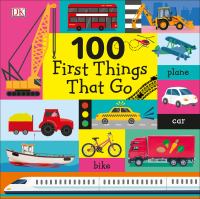 Construction Machines by Chris Oxlade
This book introduces big construction machines such as bulldozers, road rollers and concrete breakers by looking at the different places they are used.

Crane Truck Opposites by Sherri Rinker
In rhyming text, Crane Truck works at the construction site with loads both heavy and light, big and small, helping his construction friends.

Fire Trucks by Kate Riggs
A kindergarten-level introduction to fire trucks, covering their firefighters, equipment, role in rescuing and such defining features as their ladders.

Get to Work Trucks! by Don Carter
Shows a typical day for a group of working trucks: a loader, a dump truck, a digger, a bulldozer, a cement mixer, a tow truck, a crane and a roller.

Mega Machines: Learn about Things That Go! by Jeff Ashworth
No job is too big, no pup too small―especially with the help of these amazing machines! Dive into this fact-filled book packed with care, boats, planes and the pups of PAW Patrol.

Richard Scarry’s Busy Busy Construction Site by Richard Scarry
Little builders will love putting on their hard hats and heading to work alongside huge dump trucks, gigantic bulldozers, powerful ditch-diggers and more! Full of colorful vehicles and friendly faces from Scarry’s Cars and Trucks and Things That Go and What Do People Do All Day?, construction work has never been so much fun.

Supertruck by Stephen Savage
When the city is hit by a colossal snowstorm, only one superhero can save the day.

Trucks by Gail Gibbons
Trucks dig holes, trucks push heavy loads, trucks haul, pull, lift and dig. Sixty trucks, and what they do, are shown in this colorful board book.

Vroom Vroom Garbage Truck by Asia Citro
A garbage truck goes through its daily routine of picking up garbage throughout the city and bringing it to the dump, in a book that explores the sounds a garbage truck makes.