Amanda Panda Quits Kindergarten by Candice Ransom
When Amanda Panda's first day of kindergarten does not go according to plan, she decides to quit and join her older brother in the second grade.

Back to School! by Nancy Rose
As summer comes to an end, Mr. Peanuts, a squirrel, helps his friend Rosie prepare her classroom and the school for the students' return.

Big Boys Cry by Jonty Howley
As they walk to his new school, a frightened Levi and his father learn that it is okay for big boys to cry.

Even Monsters Go to School by Lisa Wheeler
A grown-up monster describes in rhyming verse how monsters of all types go to school, and so must this child monster, no matter how glum about the prospect. 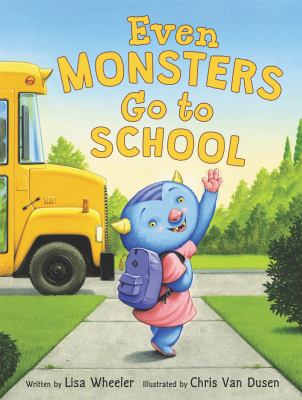 The King of Kindergarten by Derrick Barnes
Instilled with confidence by his parents, a young boy has a great first day of kindergarten.

Lena’s Shoes are Nervous: A First-Day-of-School Dilemma by Keith Calabrese
Lena is excited about starting kindergarten but her favorite shoes are not until, with the help of her father and a very special headband, she convinces the shoes―and herself—to be brave.

Lola Goes to School by Anna McQuinn
Lola meets new friends and tries many new things on her fun but exhausting first day of school.

Milk Goes to School by Terry Border
Milk goes to school and has a hard time making friends with the other food classmates.

Monster Academy by Jane Yolen
It is the first day of school at Monster Academy, where all the monsters go, and the lesson for the day involves counting missing teeth, and Vic the vampire is sad because he still has both fangs―until Jo, a troublemaking student who whirls like a dervish but is actually a human, gives him an apple at lunch.

Pete the Kitty’s First Day of Preschool by Kim and James Dean
Pete the Kitty has his first day of preschool, where he meets the teacher, sings fun songs and paints a picture.

The Pigeon Has to Go to School by Mo Willems
The pigeon must go to school, but frets about math, learning the alphabet, heavy backpacks and what the teacher and other birds will think of him.

School Day by Billy Steers
Betty the school bus is upset over making mistakes on her very first day, but Tractor Mac and the farm animals provide tips and encourage her to practice and try again.

Unicorn is Maybe Not So Great by Bob Shea
Concerned about losing friends during the first week of school, Unicorn upgrades his fabulousness.