Discuss the books you are reading to children. Ask questions and talk about the illustrations. This interactive reading engages children and makes the book-sharing time enjoyable.

Big Plans by Drew Scott and Jonathan Scott
Twins Drew and Jonathan are thinking up big plans for building project. Maybe a treehouse or a castle, but no one thinks they can do any of them. They brainstorm, scribble and tinker until they have the perfect big plan.

Billions of Bricks by Kurt Cyrus
A counting book that leads readers through the day in the life of a construction worker building with bricks. 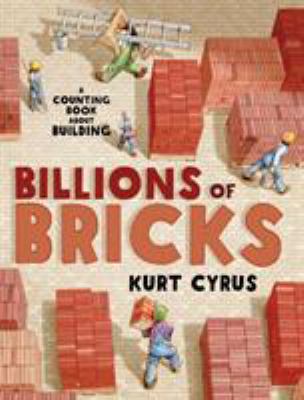 Builders and Breakers by Steve Light
This picture book about an urban construction site celebrates builders, breakers and the machines they use.

Bunny Built by Michael Slack
LaRue is the handiest rabbit in Westmore Oaks, and when he grows an enormous carrot, he uses it to help his neighbors.

Busy Builders, Busy Week by Jean Reidy
A cast of animal characters are building a brand new playground in a local park and each day of the week contains a different construction plan. The construction project comes together for a rhyming walking tour of a neighborhood, where young readers can learn the days of the week while watching everyone work as a team.

Construction by Sally Sutton
A rhythmic read-aloud full of bustling illustrations and sound words that beg kids to join in. Thonk! Clonk! Clap! At the construction site, big machines and busy workers dig, hoist and hammer away.

Demolition by Sally Sutton
Illustrations and rhyming text show the enormous and powerful machines that are used to demolish a building so that a playground can be built.

The Diggers are Coming! by Susan Steggall
Follow all the people and vehicles involved in building a house - from the wreckers coming to clear the ground, through planners, bulldozers, diggers, tippers, mixers, trucks, builders, cranes, rollers and vans, to the people coming to move into the new houses.

The Mixed-Up Truck by Stephen Savage
A little cement mixer learns that making mistakes isn't always a bad thing in this vehicle book.

One Big Building: A Counting Book About Construction by Michael Dhal
A counting book that follows the construction of a building, from one plan to twelve stories. Includes related facts and counting activities.

Over at the Construction Site by Bill Wise
Mommy and daddy construction vehicles encourage their little ones to push, dig, load and roll at the construction site.

Push! Dig! Scoop!: A Construction Counting Rhyme by Rhonda Greene
In this variation on the classic song "Over in the Meadow," mother and father trucks show their youngsters how to build down at the construction site, from "mama bulldozer with her little dozer one" to "mama steamroller with her little rollers ten."

Ready, Set, Build! by Meg Fleming
A builder sketches a project, then gets to work with his friend digging, lifting and sawing.

Roadwork by Sally Sutton
There are many big machines and busy people involved in building a road. This rhyming picture book follows them every step of the way.

Buildings and Roads: Songs and Rhymes

Optional: Make five nails and hammer from felt and use as a felt board rhyme

Additional verses:
A saw that went see-saw
A wrench that turn-turned
A screwdriver that would twist-twist
Pliers that pinch-pinch
And a drill that went ZZZZ-ZZZZ

Building a House
Building a house is lots of work, (wipe brow.)
First, you dig up lots of dirt. (pretend to dig.)
Then you pour a concrete floor, (touch floor.)
And pound boards with nails galore. (pretend to hammer.)
Doors and windows go in fast, (draw squares in air with finger.)
Now your house is done at last. (clasp hands together above head.)

My Little House
I’m going to build a little house with windows wide and bright. (stretch arms out to sides.)
With chimney tall and curling smoke rising out of sight. (stand tall, spiral hand upward.)
In winter when the snowflakes fall, (twinkle fingers down like falling snow.)
Or when I hear a storm, (cup hand behind ear.)
I’ll go and sit inside my house where I’ll be snug and warm. (hug self.)

Additional verses:
saw our wood, use a screwdriver, drill a hole, stack the bricks, paint the walls, stir the paint